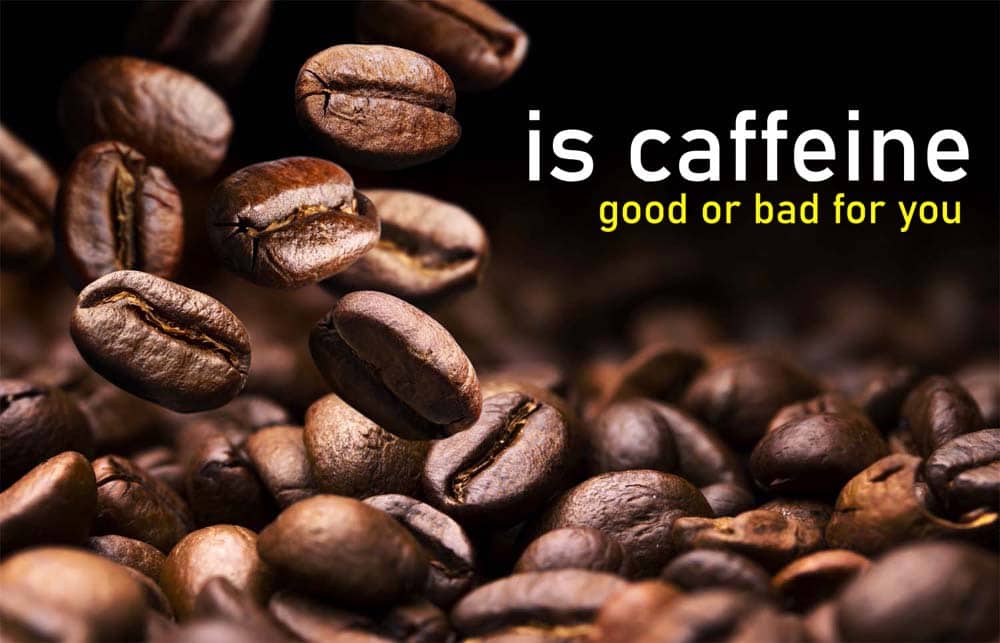 People say, “life can be measured with coffee spoons.” Well, we don’t know that for sure, but to jump-start your body after a good night’s sleep or a hectic day, a cup of coffee can be your silver bullet. And caffeine is the most vital compound in coffee. Per 100 grams of coffee contains around 40mg of caffeine.

So, a cup of coffee without caffeine is like water without oxygen. Coffee has been introduced as a magical drink filled with nuanced flavor and rich aroma. To keep you energetic and passionate throughout the day, coffee is the best remedy you can get under the budget.

But there goes a saying, “for every high; there is a low, every good a bad.” And here arises the million-dollar question, “is caffeine good or bad for you?”. Well, let’s dive into the details.

It keeps your brain alert and helps you avoid tiredness by stimulating your central nervous system or CNS. Historians think coffee was first brewed back in 2737 B.C. Though some critic says, coffee was first discovered by an Ethiopian shepherd when he noticed the extra energy his goat exhibited after eating coffee plants.

In the late 1800s, caffeinated soft drinks started to spread globally. And nowadays, the caffeinated product is widely consumed by the people all over the world.

What foods and drinks contain caffeine?

Mostly caffeine exists in nuts, seeds, or leaves of some plants. The caffeinated beverages and food you get are processed from such natural resources. Here is a list of food and drinks that contains high amounts of caffeine:

Even there is some food also which has caffeine. For example, 28 grams of milk chocolate can have 1-15 mg of caffeine. In weight loss supplements or allergy, cold, and pain meds, caffeine is a common additive.

Is Caffeine Good or Bad for You?

Americans adore caffeine. Research suggests that around 80% of adults in America consume caffeine in different forms, such as tea, coffee, energy drinks, or soda. Now, you might wonder, “is caffeine good or bad for you. To give you a vivid idea, let’s split the question into two different parts.

Is Caffeine Bad for You?

Previously, the doctor had suggested people avoid any food that contains a high amount of caffeine. And coffee is one of the strongest examples among those. They thought high caffeine intake might boost the risk of heart-related issues and stunt growth.

Also, there is a greater risk that people might become addicted to the high energy of caffeine. And gradually they will become more addicted to it. Some experts were also worried that high caffeine intake might impact the digestive system badly. And it could cause heartburn, ulcers, and other stomach-related illness.

However, modern studies didn’t find those claims that legit. The thing is when a coffee drinker developed more bad habits such as drinking, smoking, and poor physical activity.

It’s clear that caffeine wasn’t the leading contributor here. So, it wouldn’t be so wrong to say those studies were all bogus. However, we shall not forget that “excess is always bad.”

Is Caffeine Good for You?

Some studies have claimed that regular coffee drinker lowers the risk of developing type 2 diabetes by 11 % than nondrinkers. And the credit goes to the ingredients in coffee that have a significant effect on hormones related to your metabolism.

A large study was done involving thousands of people; researchers have come to know that people drinking 2-3 cups of coffee in a day had a quite lower risk of suffering a stroke.

Heart experts have explained the reason; caffeine keeps your blood vessel flexible and healthy. It also decreases the risk of a heart attack.

The high antioxidant caffeine contains fights oxidative damage, which leads to cancer. And this claim has been proven by observing a lower risk of liver cancer among coffee drinkers.

Who doesn’t want to live longer? Yes, coffee can play a great role in living longer. A recent study says that caffeine drinkers are less likely to have premature death than nondrinkers. A limited amount of intake is always ok, just don’t get hooked to it.

If I ask you, can you imagine your morning without a cup of hot coffee? I don’t know what you are going to answer. But you know what, most Americans can even kill for a cup of coffee. Well, not literally but, coffee is the 2nd most essential thing to me after democracy.

Therefore, it’s high time to know how this addictive liquid you are drinking affecting your health. So, would you like to hear the good news or bad news first? Well, most people would say, let’s get to know the bad one first. So, here we go.

We should not forget that caffeine is a drug. In general, a limited amount of it is pretty much safe for your health but, there’s a higher chance you might get addicted to it and find it hard to get over. Here are some notable negative-effects that caffeine can have on your body:

Caffeine has been scientifically proven to be beneficial for your health in various ways. Scientific studies have found that regular intake of caffeine can reduce the chance of getting Parkinson’s disease. Here’s more:

Coffee can be a healthy drink if you can keep the thirst under control. It can help you to prevent many diseases even increase your life-span.

How Does Caffeine Work?

Caffeine can have a strong effect on your brain’s central nervous system, muscles, heart even blood pressure. Caffeine can also increase your blood pressure, however, it won’t affect you if you are a regular drinker. Caffeine sort of acts like a “water pill” can trigger your urine flow.

Negative-Effects of Caffeine on The Brain

Taking too much caffeine can have a negative impact on your brain. Such as hyperactivity, restlessness, sleepiness. Especially if you have a high-anxiety issue or thyroid hormonal-issue, you should avoid taking caffeine. So, yeah, “know before you go.”

How Much Coffee Is Too Much for A Teenager?

American Academy of Pediatrics AAP suggested teenagers aged 12-18 should limit their caffeine intake to 100 mg. And for children under 12 years old, no designated threshold was found.

It has been proven that teenagers could be more sensitive to caffeine resulting in high anxiety, dehydration, and diarrhea. Even taking a limited amount of caffeine in the afternoon or evening can lead them towards bad sleep quality. Dr. Miller says that caffeine can cause abnormal heart rhythms leading you to hallucination or seizures.

Is Caffeine Bad for Kids?

The caffeine in your coffee, tea, or soda has some dose-response effect in children. Because when it comes to body size, they are much smaller. So, it doesn’t take much caffeine to have an impact on their body.

So, too much caffeine intake can cause rapid heart rhythm and blood pressure, sleep disturbance also acid reflux. Therefore, you should be careful with giving your kids caffeine. A higher dose of it can be toxic.

Having a cup of coffee in the morning won’t kill you. It’s quite beneficial for your mood and body. An adequate amount of caffeine can give you a quick boost in your mood and keep you focused on your daily activities.

However, we all must remember “excess is always bad.” Taking too much caffeine can lead you to some serious issues. So, you got to keep it under control. And especially if you any high anxiety issues, avoid them at all cost.

Now, let’s bring back the question on the screen, “is caffeine good or bad for you” and the answer is yes, and it isn’t.

This will help us improve your ad experience. We will try not to show you such ads again.